Vita Nuova was selected to support one of five EPA/DOT/HUD Partnership for Sustainable Communities Brownfield Pilot projects in Indianapolis’s Smart Growth District (SGD). The SGD had seen population decrease of 8% between 1990 and 2000 and approximately 1,335 of 4,098 properties (33%) withing the SGD were vacant. In addition, approximately 195 out of 4,098 properties in the SGD are brownfield, nearly 5%. Vita Nuova led a process to accurately understand the underlying issues and identified the guiding principles for the revitalization of the SGD based on smart growth principles. The strategies prioritized five actions and supporting activities that local stakeholders could pursue to achieve revitalization goals within the SGD. The plan also identified the best means for implementation and were used in conjunction with a “Funding Charrette” to focus conversation and identify a series of key investments that would help revitalize the area.

The Funding Charrette brought together a wide cross-section of the key stakeholders in the SGD and potential funders for the improvements. The potential funders included local, regional, state and federal agencies and organizations. The goal of the Charette was to match investments with funders and create concrete next steps to secure funding for the project. The City of Indianapolis was able to secure over $46 million in funding over a three-year period to and has led to rebuilding the community. 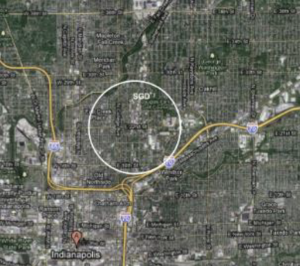